Why Scales Are A Waste Of Time

Why Scales Are A Waste Of Time

I am (surprisingly) asked this one question a lot…

People look at me and they must think I have some kind of idea!

Actually – apart from the Osteo qualifications I’ve got a degree in Biochemistry which is basically some more knowledge on metabolism & how the cells work in a bit more detail than your average high schooler, plus – I’m lean.

So I tell them this:

Your scales are fooling you.

Many people have an unhealthy fascination with scales & what they mean when you stand on them. It’s only giving you SOME of the story. It’s just giving you a snapshot of that moment in time. It can fluctuate wildly even throughout a single day. On one flight. At different times of month (if you’re menstruating). If you eat lots of bread one day & not the next. 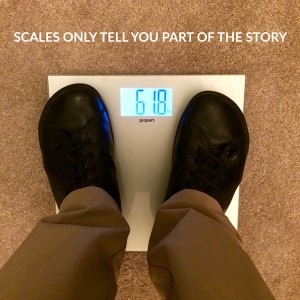 But surely you say – surely if I weigh less than I did yesterday, I’m better for it!!??

I can go out for a 150km bike ride tomorrow morning and weigh myself before, and after – then see I’ve “magically” lost 3kg’s in one morning.

No – it’s not. It’s just dehydration.

So, despite the fact that I’ve shed some “weight” (after all… It’s what we’re really wanting right) – this is where people get it wrong.

How Much Force Your Body Puts Through Scales Isn’t Relevant.

At any given point in any day – your body is either moving towards being fatter, or away from being fatter. It’s in a constant battle or tug-of-war.

What matters is the ratio between fat mass & muscle mass. You’ve also got “bone mass” – but you can’t go and change that in a hurry, so it doesn’t really count.

What we’re rally wanting to do is try and lose the FAT on your body, while keeping or increasing your muscle mass.

So Here’s How To Lose Fat.

Disclaimer: you’re at the MERCY of your HORMONES. If certain hormones aren’t under control, there’s not a great deal you can do about fat loss, until they’re sorted. Sorry!

…And that’s FIX YOUR DIET.

I know. It’s crazy right? Who would have thought that eating pies & doughnuts don’t really help?

Does this mean you’ve got to go all “Paleo” on yourself? NO. It doesn’t. What you need to understand is that

You Can’t Out Train A Bad Diet.

What you SHOULD do is speak to a qualified nutritionist (like Erin at Nutritious Living) who will give you a run down on what to eat, and what not to eat, and when to do it. And hey – perhaps give you ways of fixing your gut health & bacteria.

Or, you could do what I do…

You’ve got to get your body to WANT to lose fat.

Like I said earlier, your body either wants to lose fat, or it wants to STORE fat. You’ve got to get the body to do the former.

The ONLY way it’ll do this is if your body goes into what’s called “ketosis”. This is when the body allows the use of fats as fuel, and the by product of this metabolism is the creation of “ketone bodies” which – incidentally you can measure, by way of a urine stick test.

If you’re burning fat like crazy – you’ll have a lot of ketone bodies in your urine. But this is definitely NOT a wise thing to do. Hence measure with a urine “keto” stick. Too many ketones, consistently is just not a good thing for your kidneys.

After several hours of not eating (ie. First thing in the morning) your body is more than likely heading towards, or is already in a mild form of ketosis. This is normal.

If you want to STOP ketosis, you’ll pretty much do this IMMEDIATELY by eating fruit. Your body would much rather use energy from sugar than ANYTHING else – simply because it takes less work to get in the blood stream. It’s got a back door pass.

You thought fruit was a good thing right? Well… Kind of, but, guess what?

It will almost immediately STOP your fat burning.

So, get up a bit earlier than usual (yes it’s cold – but hey – you’ll just have to harden up). Go to the loo. Drink a small amount of water – perhaps a small glass full. You can throw a squeeze of lemon in there. Some Apple Cider Vinegar if you want.

It doesn’t have to be hard.

But it does have to be on an empty stomach for at least 30-60mins. Drink water while you’re doing it. But not if you’re off for a run.

Do your EASY exercise.

But don’t I have to train HARD and SWEAT???

Look, of course you can. However, you don’t NEED to to lose fat. There’s a time and a place for harder exercise. You’re better off just getting out there, than freaking out about how hard it’s going to be today, and once you’re a bit fitter, you can ramp up the intensity a bit.

If you ramp up your intensity, your body is going to switch from burning fat, to using the glycogen stored in your liver & muscle. And there’s a lot of it there… So you may as well just go slow.

Can you lift weights? You SURE CAN – and I recommend it (for a heap of reasons) – but you definitely want to throw in easy cardio.

Here’s is the important part.

All too often I see people who’ve just done a 30 minute fun run – who think they’ve done a marathon & then go and “reward” themselves with a chunk of macca’s or a massive breakfast, or (heaven forbid… a JUICE!!).

What you want to do pretty quickly after exercise (30mins or so afterwards) is get some form of protein into your body. I don’t care what it is, or how you do it, but just do it.

There’s a ton of ways to vary it up, but importantly you’re not going back home to guzzle back a juice, some toast and cereal. No no no!!

So, now you’re home, getting ready to go to work, school, wherever – you’ve got to THINK about what you’re going to eat during the day. I’m no nutritionist, and here’s what works for me: Nuts, Seeds, Some dairy (that’s me). Some rye cracker things with avocado etc. I use wraps. You can get rid of the wrap and use an iceberg lettuce leaf if you want.

The point is – you don’t have to eat BREAD or too much wheat, and you should eat (healthy) fats. You’ll feel “satisfied” for longer.

So How Do You Super Charge All Of This?

Do you eat less?

Kind of – you eat less of some things (i.e. Sugar), but then overall – you’ll actually want to eat MORE (be prepared!).

If your diet is trimmed back to awesome food – your body will look after you.

Then – the only thing to do is MORE EXERCISE, MORE OFTEN.

That folks, is it.

Problem is – most people don’t know how to do this sort of thing, so they turn to people who’ve got some idea. Like (In Geelong) Tracey Dowie Personal Training or for Swim /Bike /Run (or all three – triathlon) training the “go to” people are GPC Squad .

These people will get you much fitter, much faster.

Create goals. Enter an event that scares you. Stick with it. Follow training advice & your body will repay you in spades!!